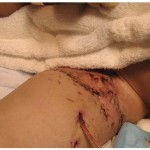 The attack on Dominic caused his femoral artery to be severed. This and the following pictures depict the several hundred staples and stitches around his upper left thigh. Dominic spent 5 1/2 hours in surgery and had a 2nd surgery 6 days later to refine the nerve and vascular repair. You will also see the drain that remained in his leg during the entire 17 day hospital stay. 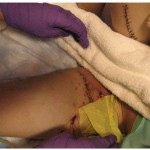 Here if you look at his right thigh, you can see the incision where a vein was harvested to repair his femoral artery. The vein was used to graft to the femoral artery of his injured left leg. 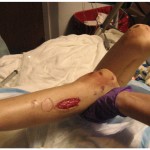 This shows the fasiotomy, a procedure where both sides of the calf have a surgical incision for its length. This allowed the muscles in his calf to expand, enabling blood flow to the foot. This picture was taken about ten days later. The big circle you see below the incision, is a huge blister that formed under the bandage and eventually burst. 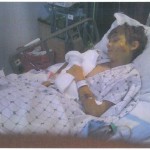 This photo was taken with a cell phone, one day after he was released from PICU. While it is starting to go down dramatically, you can see the swelling and green hue on his left cheek . The teeth marks are 1/2″ beneath his Eye socket and across the tip of his nose which had to be sewn back on. We intentionally refrained from taking pictures until we knew he was going to survive. 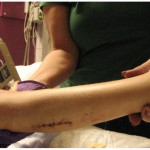 This picture is taken of the incision on the inner calf. That muscle had gone in enough to allow it to be stitched closed. The outside calf muscle was allowed to close naturally and today has a much more noticeable scar. 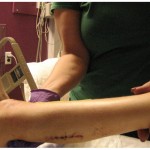 When this picture is expanded, you will notice that his foot is still swollen. Also on the top of his foot a pain medication patch. This was used in concert with IV pain medication. 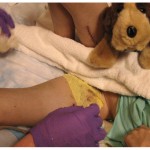 Dominic and a gift , his stuffed toy dog ,assisting him going through the three times daily (every 8 hours) changing of his wound dressings. 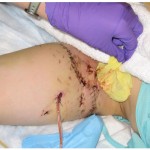 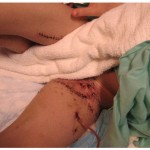 His pain both short and long term during recovery, can not be captured in a picture. Not withstanding the injuries to his face and arms, how do you abandon anyone, much less a child, in this condition? 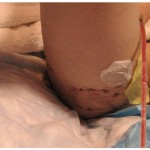 More puncture wounds from the Pit Bulls lower jaw on the back of Dominic’s thigh. 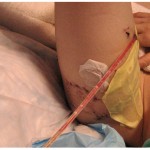 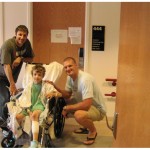 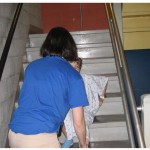 The physical therapist getting Dominic to be mobile. Matt Stover sat beside Dominic and did the exercises with him on Dominic’s first attempt at navigating a staircase. 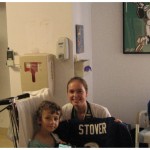 A pediatric doctor and Dominic showing off the autographed jersery Matt Stover gave him. If you look closely at the bottom of the picture, you can see the Sony PSP Matt delivered on behalf of Dominic’s team, L.T.R.C. Football. Matt Also gave Dominic an autographed picture, and stayed in touch with weekly phone calls. He challenged Dominic at the hospital, that when he could run he could go on a tour of the Raven facility.
Accomplishing that goal, Matt made good on the tour, he also sent Dominic all of his NFL cards personally autographed. 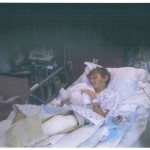 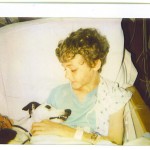 Dom gets a therapeutic visit from man’s best friend. 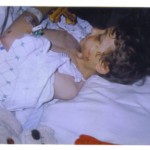 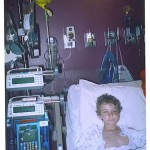 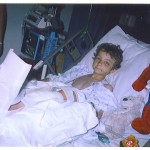 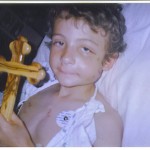