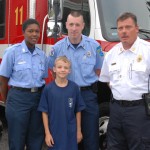 Left: EMT Rachelle Alexander, amazingly drove the Medic to Johns Hopkins from Towson in only 8 1/2 minutes. Center: PM/FF Brian Neville attended to Dominic en route to Johns Hopkins. Right: Capt. Steve Adelsberger was the First to arrive on scene, relieving Eric Rasmussen and Irene Solesky who provided initial first aid. Dominic got a chance to visit the heroes of station 11 on 9/11/07, 5 months after the incident. Dominic is wearing the Baltimore County Fire Dept tee shirt they gave him as a gift from Station 11. He also received the company patch. 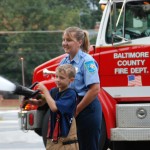 Here Dominic is donned in Turn out gear and gets to direct the pipe, backed up by FADO Shelley Burnett. 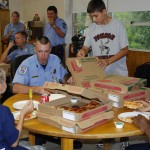 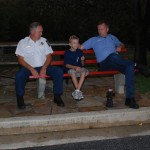 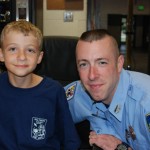 A fallen hero A fallen hero Sadly, Brian Neville, husband and father of three, whose expert training played a key role in saving Dominic’s life, passed away only 13 months after our visit to Station 11. He will forever be remembered and missed by us all.