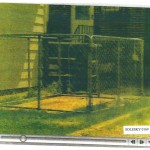 This is a photograph of the collapsible dog pen. It was removed immediately after the attack was reported by local TV news. The dog owner was attempting to conceal its inadequacy and his irresponsibility. The yard had no fence along the alley and the remaining yard was used as a two car driveway. There is no on street parking in front of the homes on Burke Avenue. Keep a mental note for comparison to the next picture. Notice the plywood sheet on the ground inside the kennel and the height of the pen compared to the neighbor’s garage. 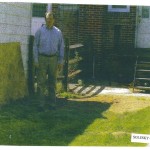 Standing next to the garage the day after the pen was removed, is the man that reverted back to his Boy Scout training and rendered the initial first aid that saved Dominic’s life. Eric Rasmussen poses with the plywood sheet used as the floor of the kennel, illustrating the inadequate size of the pen. The plywood sheet resting on an angle is 4′ showing the pen was 4 and 1/2 feet tall and about 5′ x 5′ square. Also note the length of the sheet. It had to be cut down to fit in the pen.